How and why I got into writing about Romance, especially Seasoned Romance.

Some years ago my granddaughter self-published two novels on Amazon, at the age of fourteen. I was impressed with this and thought it was something I should try, even though I was sixty-nine at the time.

I believed the younger generation thought most people over the age of sixty had one foot in the grave, and were just killing time until the grim reaper claimed them. But, I knew that wasn’t the case for many people. So, I looked for a way to write something to show them in a positive light and with love in their lives.

I got the idea to write a romance, with the hero and heroine being over sixty. The idea being to show that mature characters can have romance, relationships, and even sex. And, I came up with the idea of my mature characters all being pensioners who are residents at a retirement village which is pretty much a private 5* hotel.

There was a lot of scope for activities and relationships and I was sure the idea would work. This is a contemporary romance, but the main part of the book takes place in The Grange Retirement Village which is a converted English Country Mansion that was built in the mid-1600s.

Of course, I’m not sure how this will be received outside the UK, for example in the USA where pensioners are called seniors, and I guess retirement villages may be something else. Maybe some of you guys in The States can comment on that. 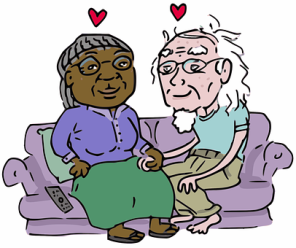 I had virtually no previous writing experience or training and no idea about planning, outlining, plotting etc. So, the book started off as a series of conversations and developed from there. Sadly, my inexperience meant that a lot of what I wrote wasn’t very good, and I had to throw away a lot of material as the book developed and the story just didn’t work properly. This resulted in writing the book taking a lot longer than I had initially expected it to.

I submitted a sample chapter to Devine Destinies to see if it fitted with the sort of work they publish, and it did. After a year of rewriting and polishing the manuscript I submitted it and ten months ago I won a publishing contract.

Now I’m just weeks away from becoming a published author when ‘Grace’s Turmoil’ is published as Book One of a series called ‘Not Too Old for Love.’

The whole experience has been fun, even though it had a social message within it. But, there was also a reason that until now was secret. I was worried about my fading memory and the prospect of Alzheimer’s, and I wanted something to do that would keep my brain active. Well, I could never have guessed just how much it would be kept active. And now it has had to take a step sideways and step up a gear as I try to get my head around marketing and all its many facets. But, that as they say is another story and will be the subject of another post.

In the meantime, let me leave you with the blurb from ‘Grace’s Turmoil’ as a taster of what to expect from this quirky, funny, emotional, sweet romance.

Divorced and emotionally damaged, artist Grace Stollery wants nothing more than to spend her semi-retirement painting and let time heal her emotional scars. So, she hides herself away in The Grange retirement village and swears off men.

But then dashing widower Alfred Nobel moves into The Grange determined to play the field and have fun. However, as soon as he meets Grace he is smitten by her. So, he tears up his plans and determines to win her heart.

Alfred sets out to woo Grace, but she is initially cautious and hesitant. Undeterred he persists and slowly Grace warms to him and he begins to win her over. In the process, he turns her life upside down and her heart inside out by awakening feelings she wants to keep dormant.

As if Grace’s resistance to his charms isn’t enough of a problem for Alfred there is a further complication. Grace may be reluctant to get involved with Alfred, but the village’s resident femme fatale isn’t. She likes what she sees and wants him for herself. Will she succeed in driving a wedge between Alfred and Grace?